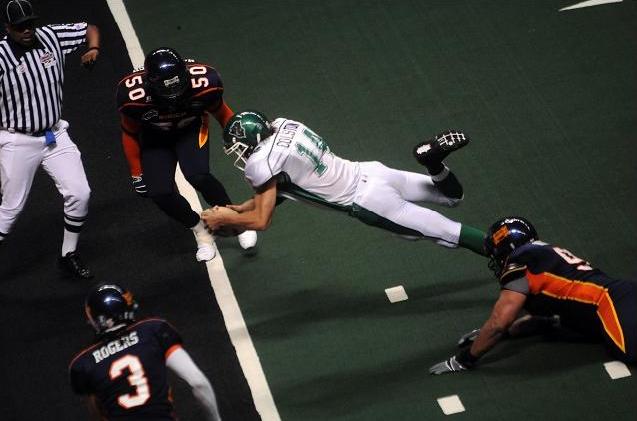 The Vipers became the 1st team ever to win the Arena Cup Championship as the visiting team. The 2008 game was voted as the #1 game in the 20 year history of Championship moments! Tony’s 2 pt conversion run in overtime made him the only backup quarterback in professional football history to come into a championship game off the bench and lead his team to a victory!

Tony began his coaching career in his home town of Clinton, TN coaching the 8th grade football team in 2005 (11-0) and the 9th grade team in 2006. From 2007-2009 he was the Offensive Coordinator for Madison Academy High School in Huntsville, AL. In three seasons, the Offense accumulated record breaking statistics in the passing game and also individually. In 2010 Coach Colston Coordinated the offense for Randolph School in Huntsville, AL, a first year varsity program.

During his 4 years in Alabama, Tony coached or privately trained 3 Division 1 WR’s, including 2014 2nd Rd Draft Pick, Jordan Matthews out of Vanderbilt.

2011-2013 Coach Colston moved back to Knoxville and spent one season as offensive coordinator at Cumberland County, Austin East, and Carter HS before moving full time in the private coaching world. In 2020, he dedicated one season back to his alma mater, Clinton HS, to help friend and first year coach Darrell Keith.

Tony has been conducting private and group training sessions since 2007 and began the Gunslinger Challenge in 2015!

In 2011, Tony signed to play in Italy for the Bolzano Giants of the Italian Football League, where he excelled as the Quarterback and Offensive Coordinator. He finished the season with over 2,000 yards passing and Coordinated the #2 Offense in the league. From 2007-2010 Tony played in the Arena Football League with the Tennessee Valley/Alabama Vipers…His career record as a starter is 19-6…In 2008 he earned MVP honors in the Arena Cup Championship game. He delivered an outstanding performance statistically, going 20 of 30 for 288 yards 7 touchdowns 0 interceptions & the game winning 2pt conversion in overtime!…..In 6 games (4-2) with the Vipers in 2007, Colston finished 96 of 171 941 yards & 16 tds before dislocating his elbow, missing the rest of the season.

Colston briefly played with the Vipers in 2006 before playing for the Centex Barracudas of the IFL in Texas, where he completed 88 of 170 passes for 1,133 yards with 29 touchdowns finishing the season with a record of 9-2.

Tony played the 2002-2004 seasons at Tusculum College after transferring from Tennessee Tech University.

His single season (.708) and career completion percentages (.635) still stand as the best ever by a SouthAtlantic Conference quarterback. He also finished 8th in SAC history in career passing yardage and touchdowns accounted for, and 6th in career total offense…During his career, he was named conference player of the week 4 times and national offensive player of the week 3 times. Tony graduated as one of the top 40 quarterbacks in the country in 2004. (All divisions)

Tony was a 3 year starter at Clinton High School in Clinton, Tennessee.  His Sophomore year he started at receiver and defensive back. His final two seasons he took over the helm at QB going 17-6 as a starter, advancing to the playoffs both seasons. He was named All-State Honorable Mention & Offensive Back of the Year his Junior and Senior seasons. Colston finished his career with 3,100 yards passing, 31 touchdowns, and 12 rushing touchdowns.